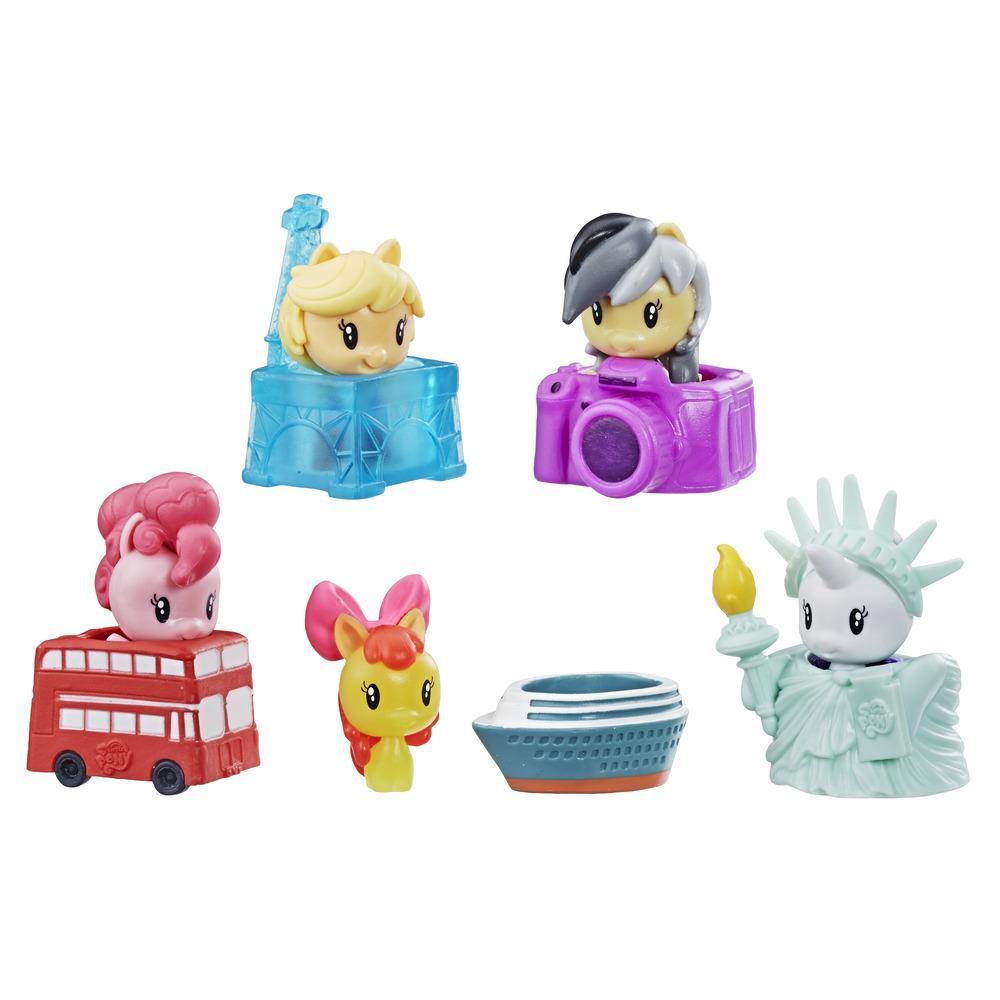 Cutie Mark Crew playsets combine the worlds of My Little Pony and Equestria Girls to imagine a universe of play and friendships beyond the mirror's portal. My Little Pony Cutie Mark Crew Series 4 has an Away We Go theme, and this Sightseeing Fun pack features 1.5-inch figures ready to travel around the world together! Includes 5 figure and accessory pairs: Rarity pony with Statue of Liberty costume, Apple Bloom pony with cruise ship, Pinkie Pie seapony with double-decker bus, and 2 surprise figure and accessory pairs! Get the party started by pulling the strings on the balloons and shaking out the colorful confetti to reveal the mystery pony, seapony, or Equestria Girls characters hidden inside. Look for more Cutie Mark Crew packs to build out a world of My Little Pony collectible figures. (Each pack sold separately. Subject to availability.) Cutie Mark Crew toys are for kids ages 4 and up.
My Little Pony and all related characters are trademarks of Hasbro.
• Includes 5 figures, 6 accessories, and confetti.
• MYSTERY FIGURES INSIDE: Sightseeing Fun pack includes 5 figure and accessory pairs, including 2 figures with fun treatments. 2 pairs are hidden for an unboxing surprise!
• TRAVEL-THEMED: Each 1.5-inch figure fits inside their adorable travel-themed accessory. Includes Rarity pony with a Statue of Liberty costume, Apple Bloom pony with a cruise ship, Pinkie Pie seapony with a double-decker bus, and 2 mystery characters!
• BALLOON-SHAPED SURPRISE: Pull the strings on the 2 balloon-shaped packages to get the party started. Then, shake out the colorful confetti inside to reveal each hidden character!
• FRIENDSHIPS BEYOND THE MIRROR'S PORTAL: Collect My Little Pony figures inspired by entertainment, including the My Little Pony Friendship is Magic and Equestria Girls television shows, and My Little Pony: The Movie!
• MINI COLLECTIBLE TOYS: Look for Cutie Mark Crew Series 4 Snow Day pack (Sold separately. Subject to availability). Great toys for kids age 4 and up to play with, collect, and share!
• Ages 4 and up.
• WARNING: Choking hazard - Small parts. Not for children under 3 years.